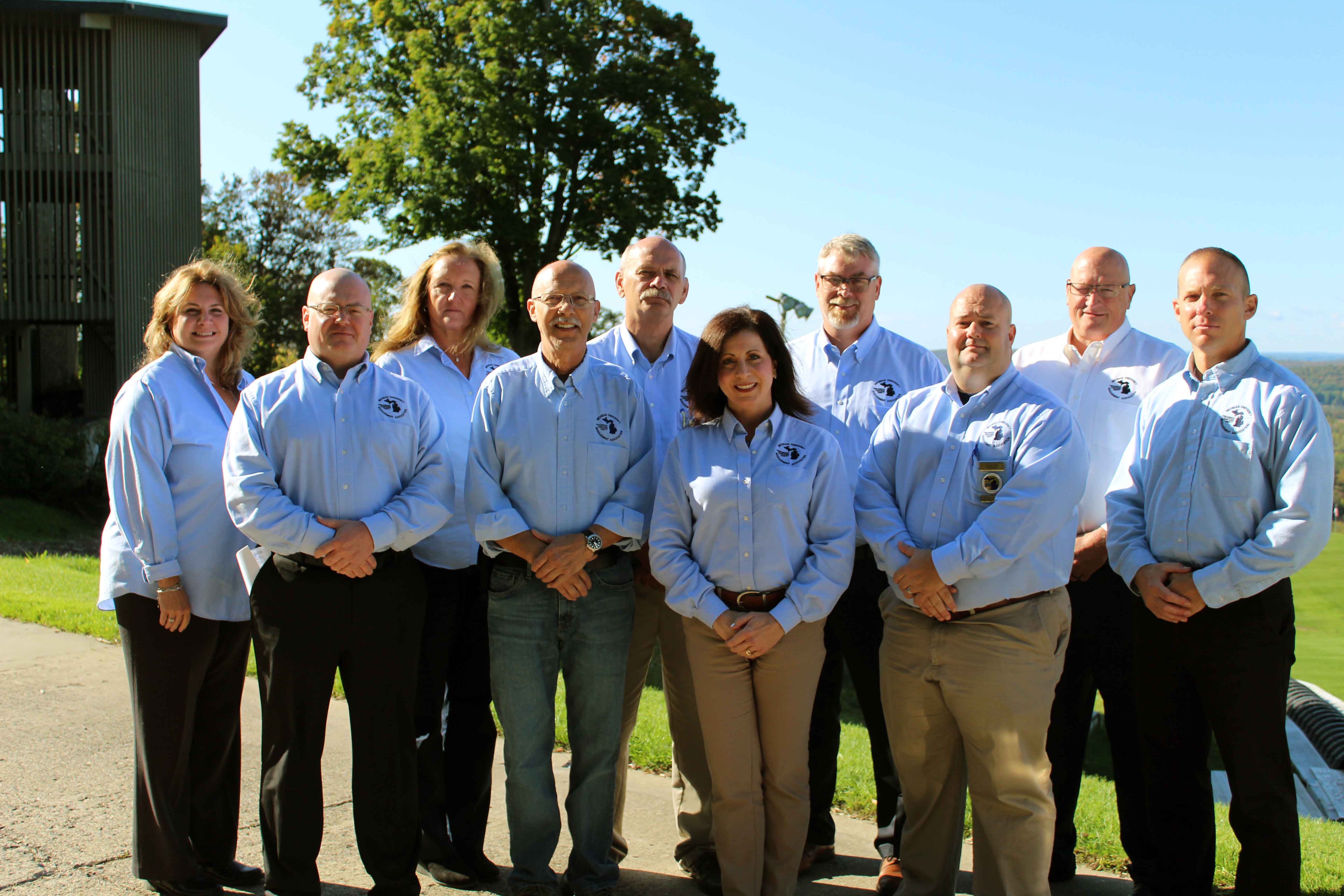 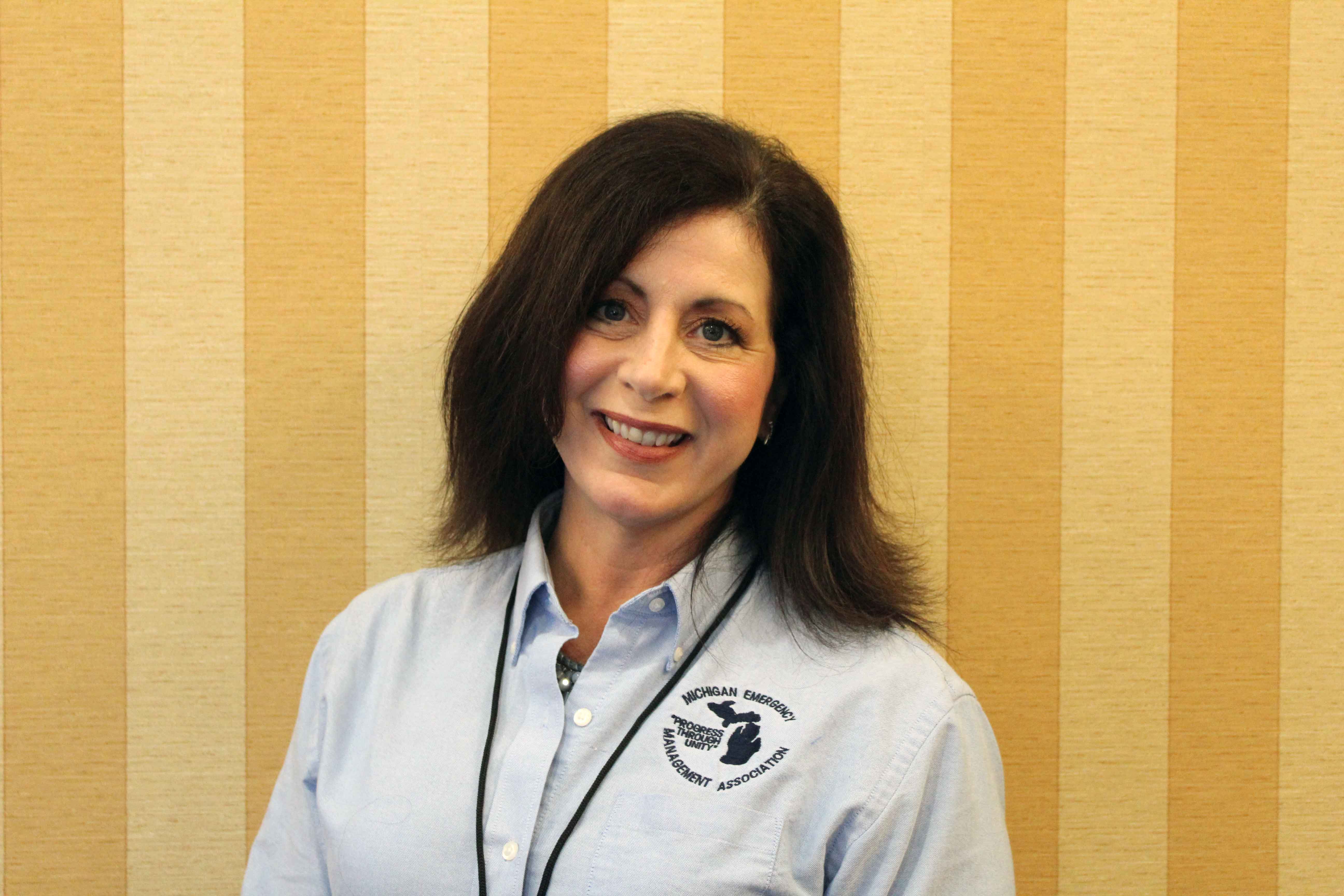 Therese Cremonte is the Livingston County Emergency Manager. She was hired by Livingston County in 2016 upon her retirement from the Michigan State Police (MSP).   While with the MSP, Therese work five of her twenty-seven years with the Emergency Management and Homeland Security Division (EMHSD) in the Training & Exercise Unit, Grants Unit, and as the Coordinator for Region One.

In her current tenure as the Livingston County Emergency Manager, Therese has utilized her emergency management skills to assist with a 53 car / 3 fatality accident that closed I-96 for more than 12 hours in December of 2016.  She has also worked with the Red Cross during a weeklong power outage in March of 2017 to get citizens with access and functional needs overnight sheltering and utilized other partnerships to set up warming centers throughout the county. Therese also set up Livingston County’s first ever public alerting system to include IPAWS capability.

Therese is married, has four children, and one grandchild.  She enjoys spending time with her family, trying new recipes, and spending time outside enjoying all of Michigan’s seasons. 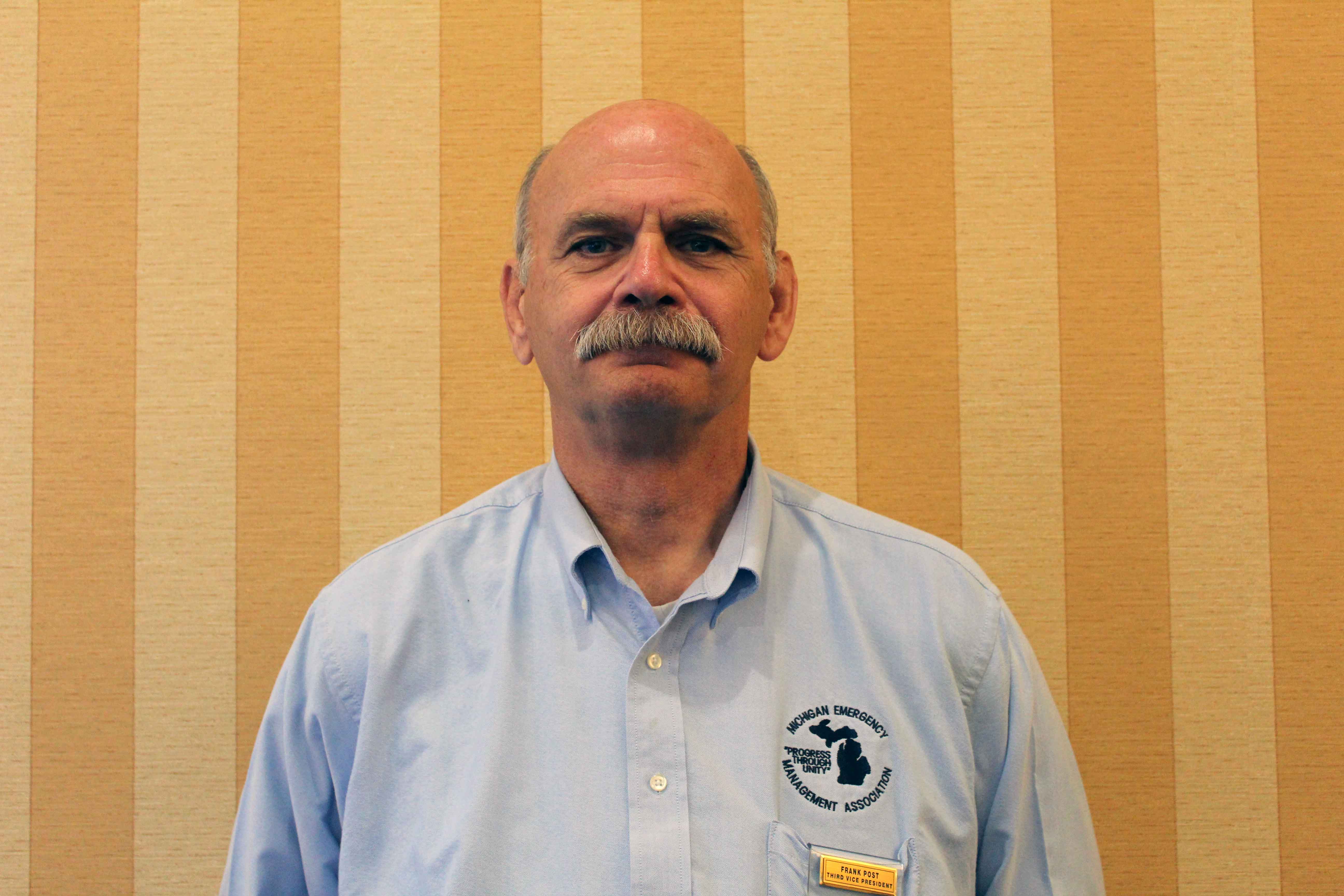 Frank Post has been a MEMA board member since being elected in 2017 to the position of 3rd Vice President.  Recently Frank was moved to the 1st Vice President position to fill a vacancy there.   Prior to becoming a MEMA Board Member, Frank chaired the Region 7 Homeland Security Planning Board for 2 years.

Frank retired from Benzie County Emergency Management as their Coordinator in August of 2019 and had been is that position since 2013.  Prior to that Frank had a 39 year career in law enforcement and Public Safety mostly in Southwest Lower Michigan with 20+ years of that career as a Police Chief and Public Safety Director in Plainwell and Emmett Township.   In 2017 Frank was selected as MEMA’s “Local Emergency Management Coordinator of the Year <60,000 Population”.

Frank also has extensive grant writing experience that includes a 2017 AFG Regional Grant for nearly $700,000 for Fire and EMS transition to an 800MHz Communications Platform and Flood Mitigation Grant in 2016 for approximately $125,000 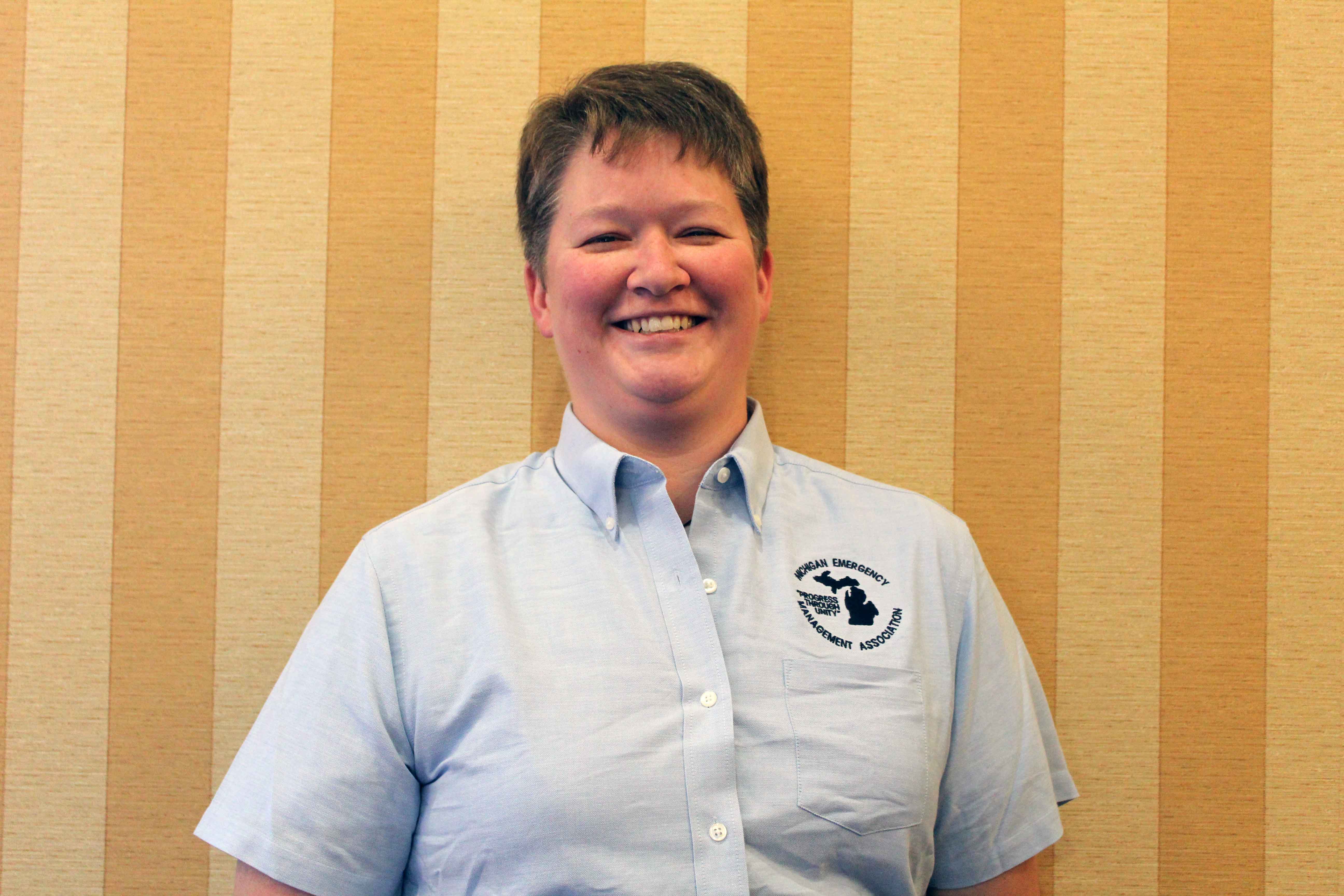 Elizabeth Reimink is Mason County’s Emergency Management Coordinator and has served in that capacity since February 2007. Liz is actively involved in writing emergency plans, educating the public on disaster preparedness, and coordinating annual trainings and exercises for the county’s emergency responders. During her tenure, Liz managed the Federally declared disaster for June 2008 flooding in Mason County and has assisted several other jurisdictions during their disasters. Liz is also one of the developers of the Proactive Response Options Training being rolled out to all of Michigan’s school bus drivers in 2020.

Liz works as a firefighter, medical first responder, and Training Officer for the Hamlin Township Fire Department. She has also served as the course manager for the FY17-18 and FY19-20 Basic Firefighting 1 & 2 Courses for the Mason County Fire Fighter’s Training Committee.

In 2018, Liz was presented the Preceptor Of The Year Award by the University of Georgia College of Public Health for hosting an intern. She was selected by her MEMA peers as the Local Emergency Management Coordinator of Year with a population under 60,000 in 2018.

When she has free time, Liz manages domestic type “incidents” as Auntie Liz with her young nieces and nephews. 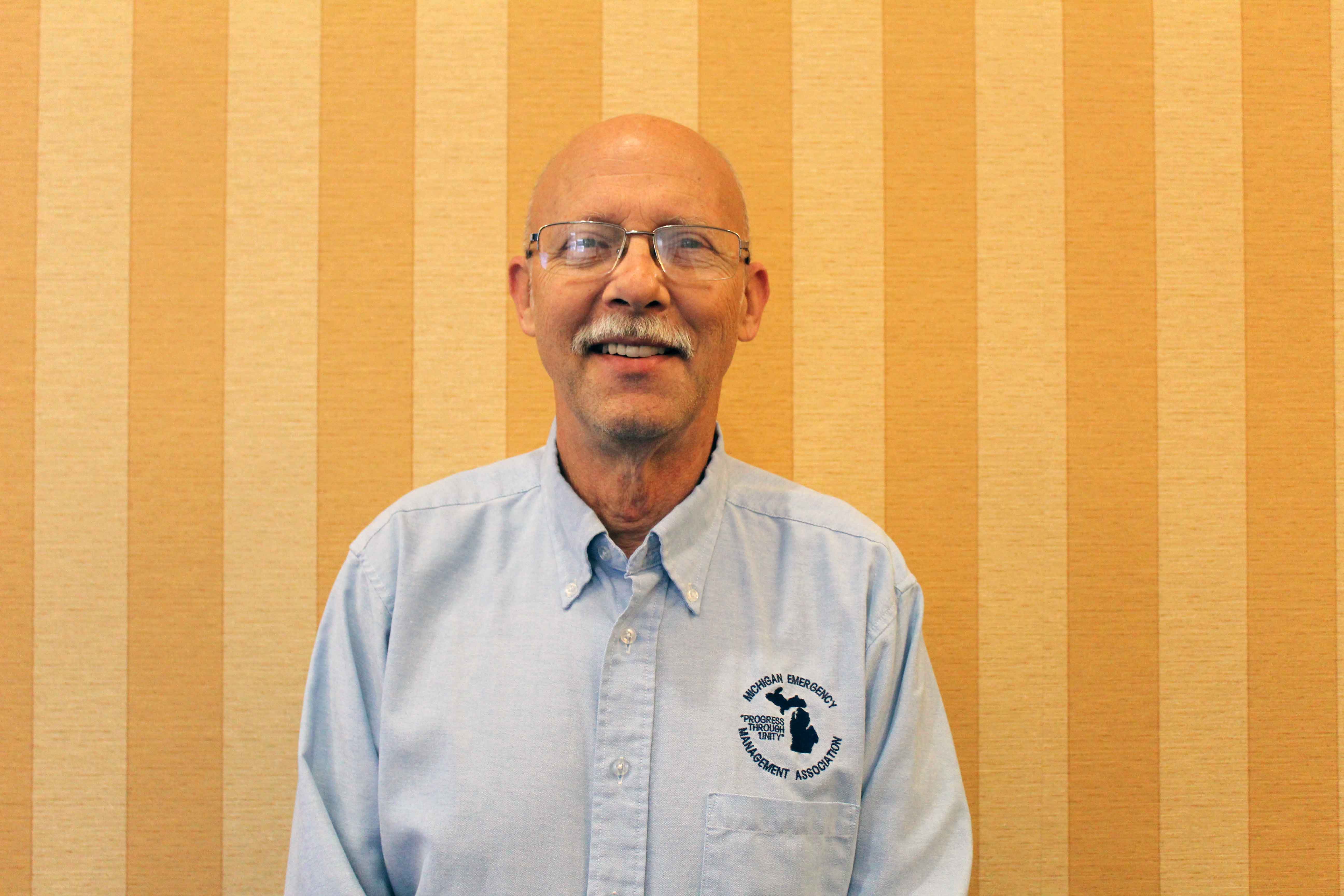 McCoy managed numerous emergency events including three major disasters in Montcalm County - the 1986 flood, the 1998 derecho, and the 2006 ice storm - the first two which resulted in Presidential Declarations and the latter in a Governor’s declaration.  He has received more individual MEMA awards than anyone in the history of the Association and was awarded the Professional Emergency Manager of the Year award in 2007.  He was appointed to serve on several state-wide committees on emergency management issues and served as the State RACES Director in 1982.

McCoy was elected Secretary of the Association in 2002, and was elected Treasurer in 2008.  He resides in Gowen (about 35 miles northeast of Grand Rapids) and enjoys woodworking, family, great food, reading, road trips, and quality time with great friends. 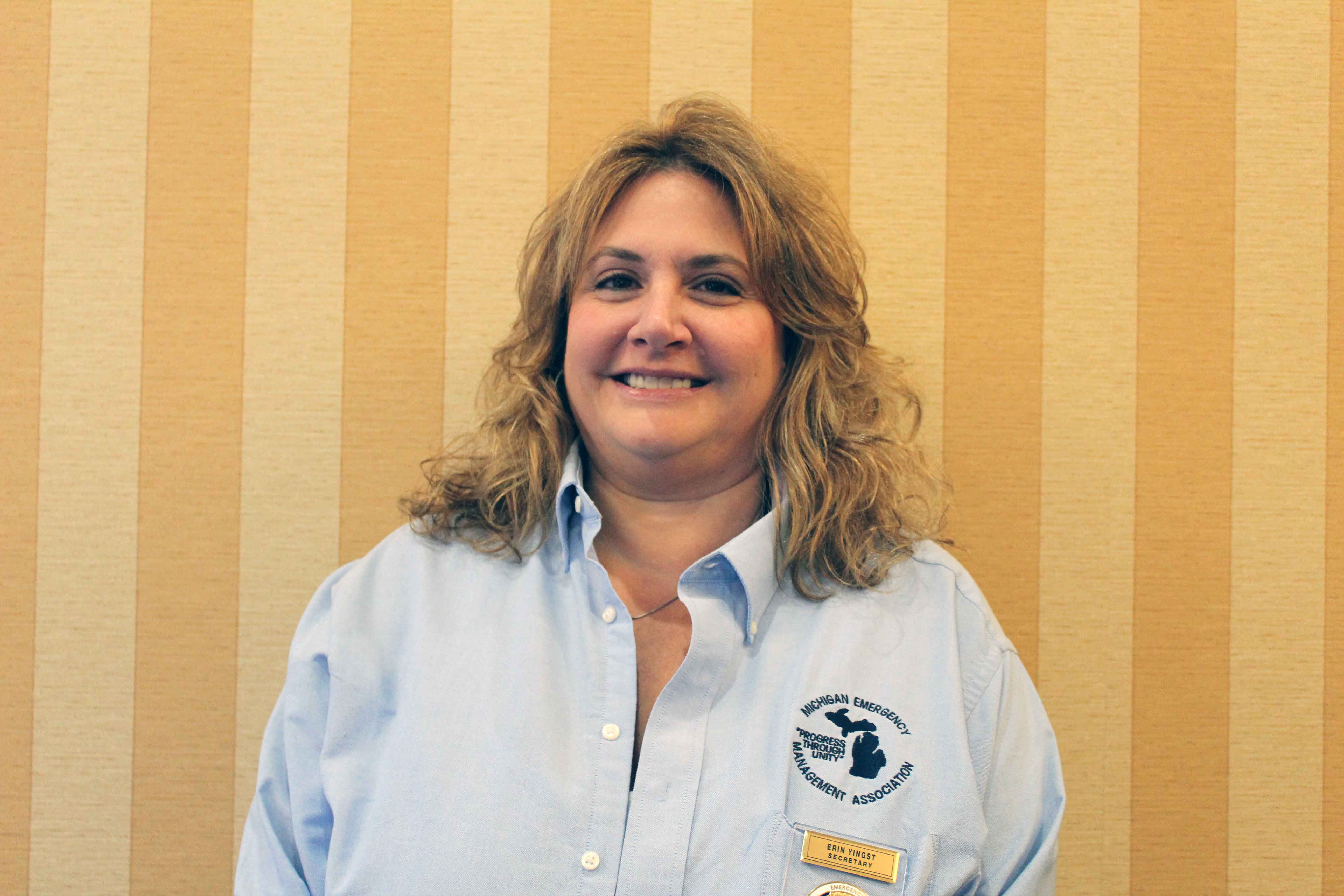 Erin is the Executive Coordinator for the 5th District Homeland Security Planning Board, which encompasses the ten emergency management programs in Southwest Michigan. She is responsible for overseeing the Homeland Security grant projects and board activities for the region, a position she has held since 2009.

Previously, Erin served for five years in a preparedness planning role for public health in Kalamazoo County, and as a public information officer for both the local public health and emergency management programs. She also worked for eight years in the education field as a public relations coordinator for the Berrien County Intermediate School District.

Erin holds a bachelor’s degree in public relations from Western Michigan University, and a master of business administration (MBA) from Central Michigan University. She also earned the designation Professional Emergency Manager from the State of Michigan.

Erin is the proud parent of two beautiful children – a daughter based out of Chicago working in a senior communications role for the Illinois State Bar Association, and a school-aged son who has been known to show up at a MEMA Conference or two. 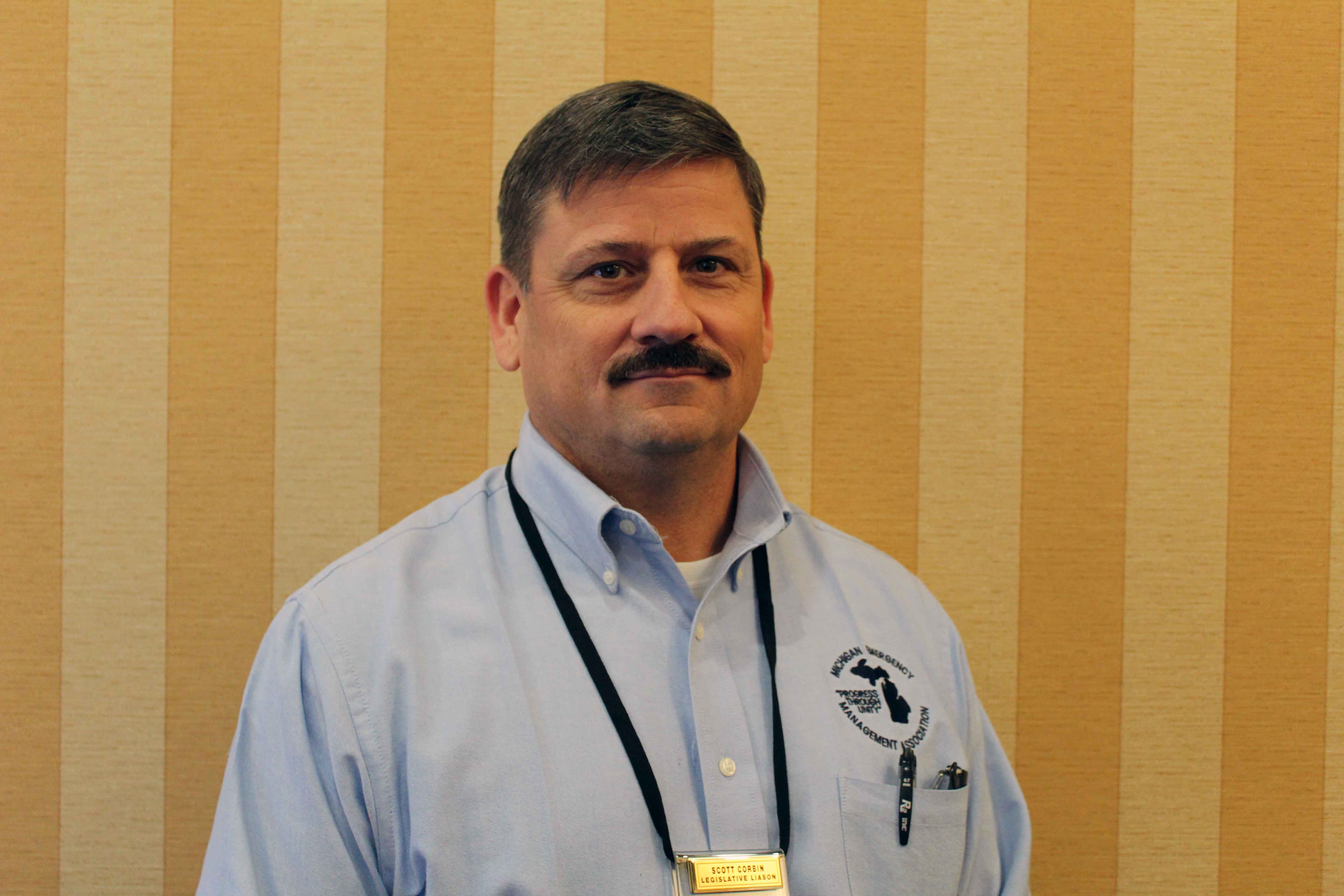 Previously Scott was with Putnam County, Ohio Office of Public Safety for six years. Scott has served as a local Law Enforcement Officer since 1994 and is commissioned in both Ohio and Michigan. Scott has also served eight years in the military as a Heavy Combat Engineer and Demolitions Expert.

Scott has an Associate’s degree in Law Enforcement from Owens Technical College, and a Bachelors of Arts Degree in Organizational Management from Bluffton University.   Scott currently holds many certifications which include the Professional Emergency Management Certification (PEM).

Scott serves as a Board Member for Plainwell Public Schools and the American Red Cross Board of Directors of Kalamazoo, Michigan. 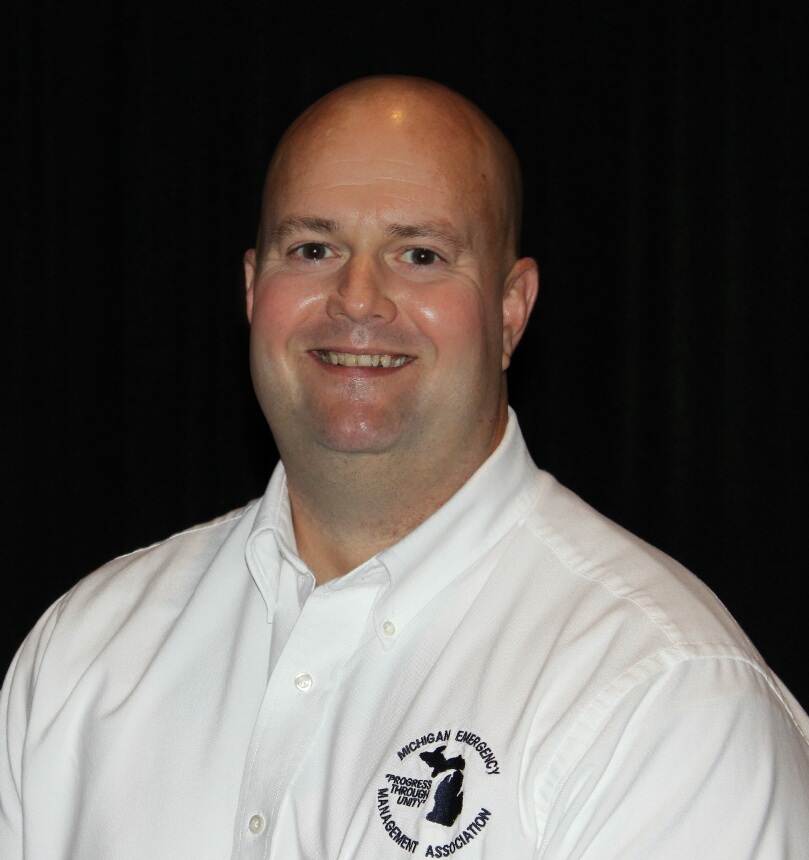 Gregg has been involved in Public Safety since 1990. He has 26 years’ experience in the fire service and 23 years in 9-1-1 Dispatch and organizational management. His Emergency Management career officially began in 2005 while deployed from Maryland to the Mississippi State Emergency Operations Center in response to Hurricane Katrina.

Prior to being selected as Grand Traverse County’s Emergency Management Coordinator in 2013, he was the Deputy Director of Emergency Services for Kent County, Maryland Office of Emergency Services. His duties included the daily management and operation of the county’s multi-discipline 9-1-1 center, and the Advanced Life Support EMS program, as well as the Operations Chief for the Emergency Operations Center. Gregg is one of a handful of National Emergency Management Assistance Compact (EMAC) Advance Team personnel who have been assigned to the National Response Coordination Center during disasters and has also been deployed to numerous national incidents of significance, including Hurricane Katrina, The Mississippi and Red River Floods of 2006, Hurricanes Gustav & Ike, and the US assistance to the State Department as a result of the Haiti earthquake.

Gregg holds a Bachelor of Science degree in Emergency Management from the University of Maryland and resides in Traverse City with his wife, Stacey and two stepsons, Shane and Cameron. 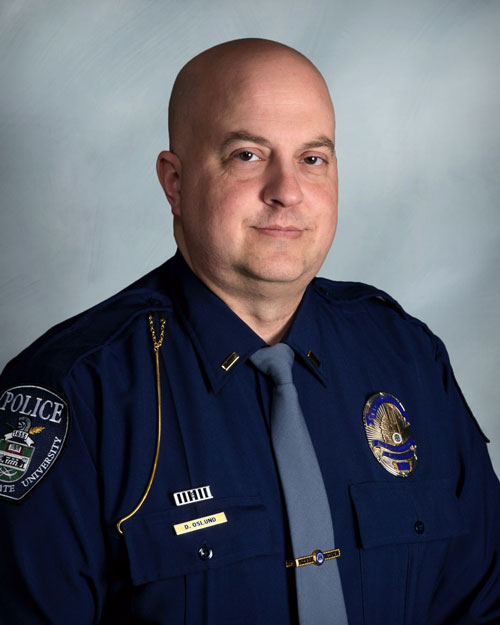 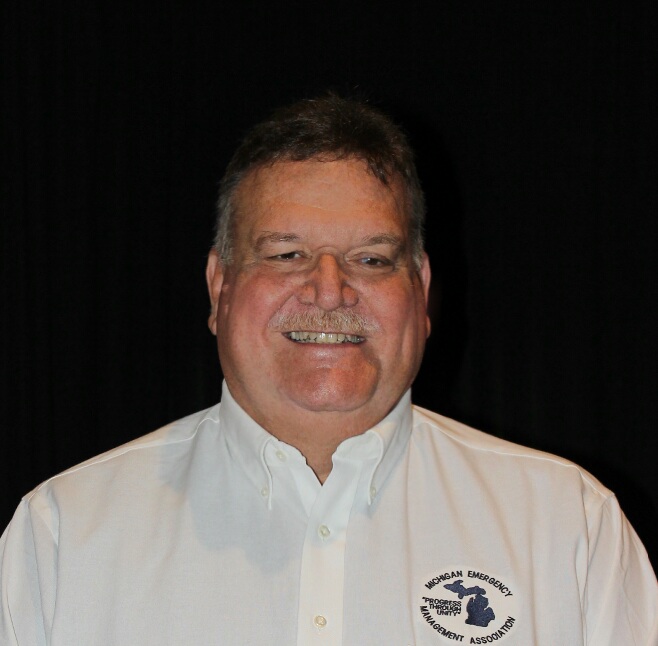 Mark Hammond has been elected to serve as the Michigan Emergency Management Association (MEMA) Liaison to District 2 North for 2017 - 2018. 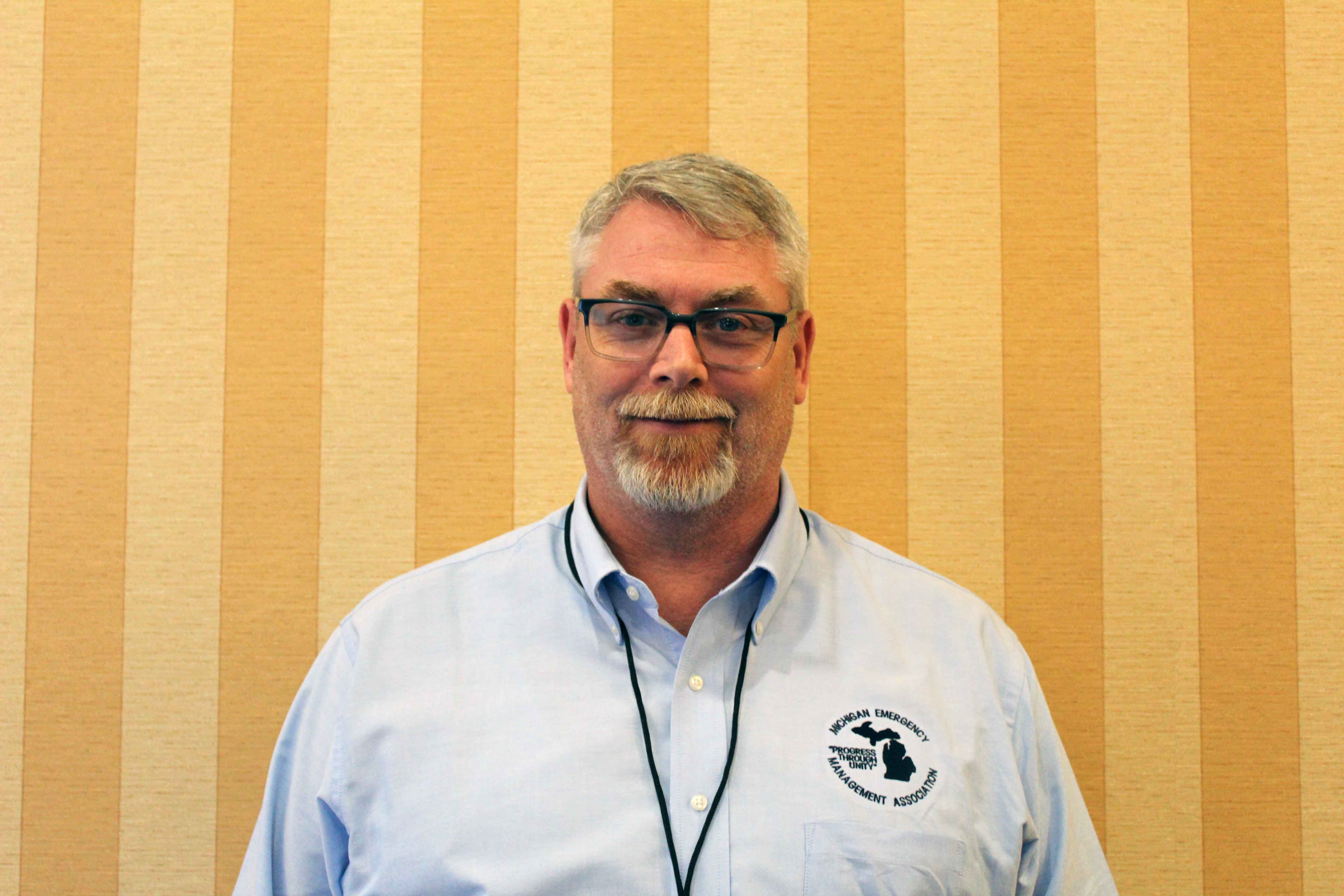 Thomas Hardesty has a Master’s Degree in Public Administration/Criminal Justice from U of M Flint Graduate of Northwestern School of Staff & Command in 2002 and FBI National Academy Class 232 in 2008.

He has 26 years in law enforcement for the City of Auburn Hills, retired as Deputy Director at the end of 2014.  After retirement, Thom became Director of Security for Palace Sports & Entertainment (venues included the Palace, DTE & Meadowbrook Theatres). He oversaw the planning for hundreds of special events including NBA Finals, dignitary visits, concerts, etc.

Thom was then hired by Oakland County at end of 2015 as administrator for the Medical Examiner’s Office and later appointed as Emergency Management Coordinator and Manager of Homeland Security Division for Oakland County in April of 2017.

Thom is presently working on PEM. 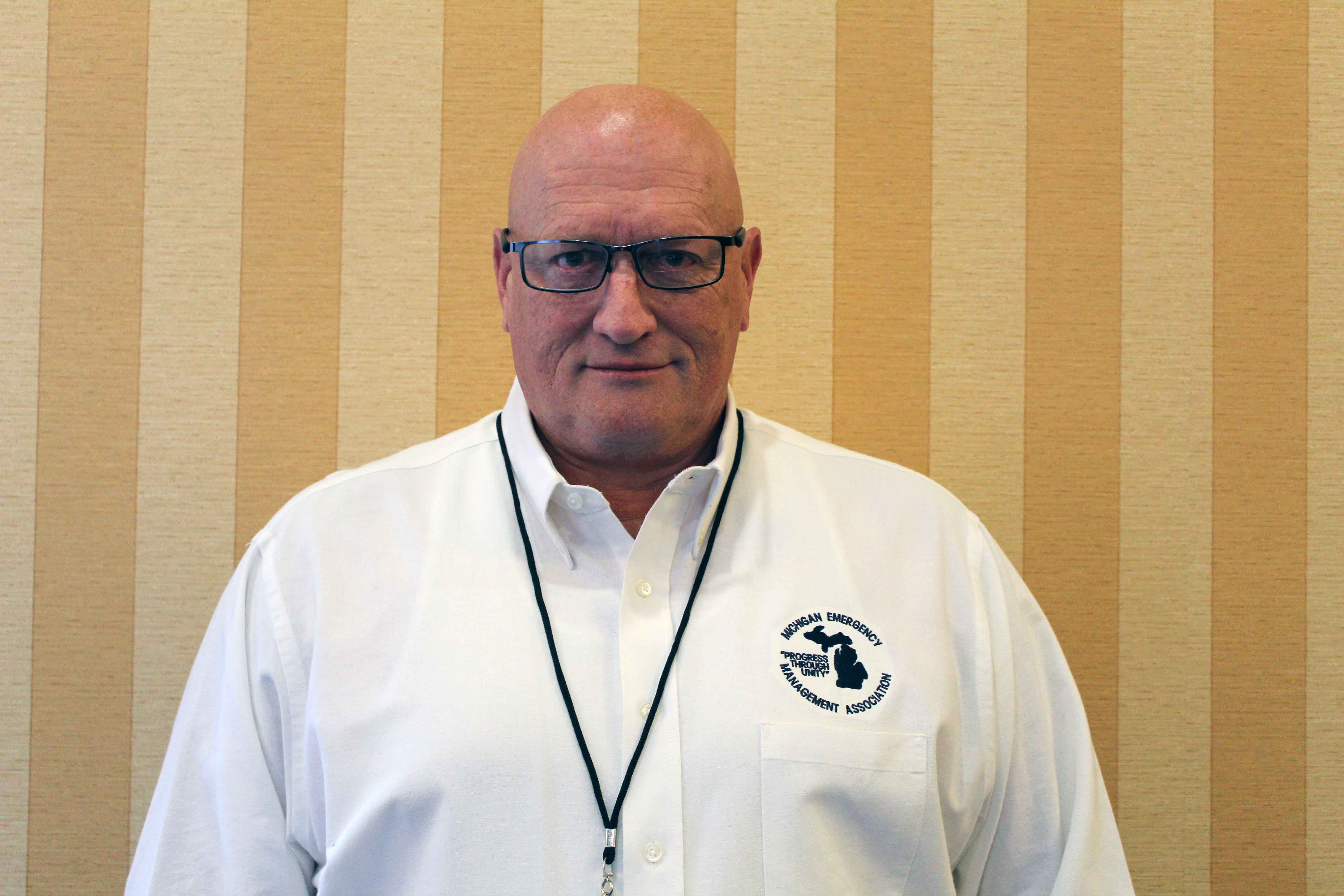 Jim Yarger has served as the Emergency Management Coordinator for Barry County since 2004. Jim currentlyserves as the Chairperson for the 5th District Homeland Security Planning Board, which encompasses the ten emergency management programs in Southwest Michigan. Jim currently holds many emergency management and fire service certifications which include the Michigan Professional Emergency Management Certification (PEM).

Jim is the project chair for the Michigan Technical Rescue Team Region 5. The MI-TRT-5 is made possible through the collaboration of 26 fire departments in the 5th District.

Jim started serving on the Freeport Area Volunteer Fire Department in 1979 and has held the position of Fire Chief there since 1999. 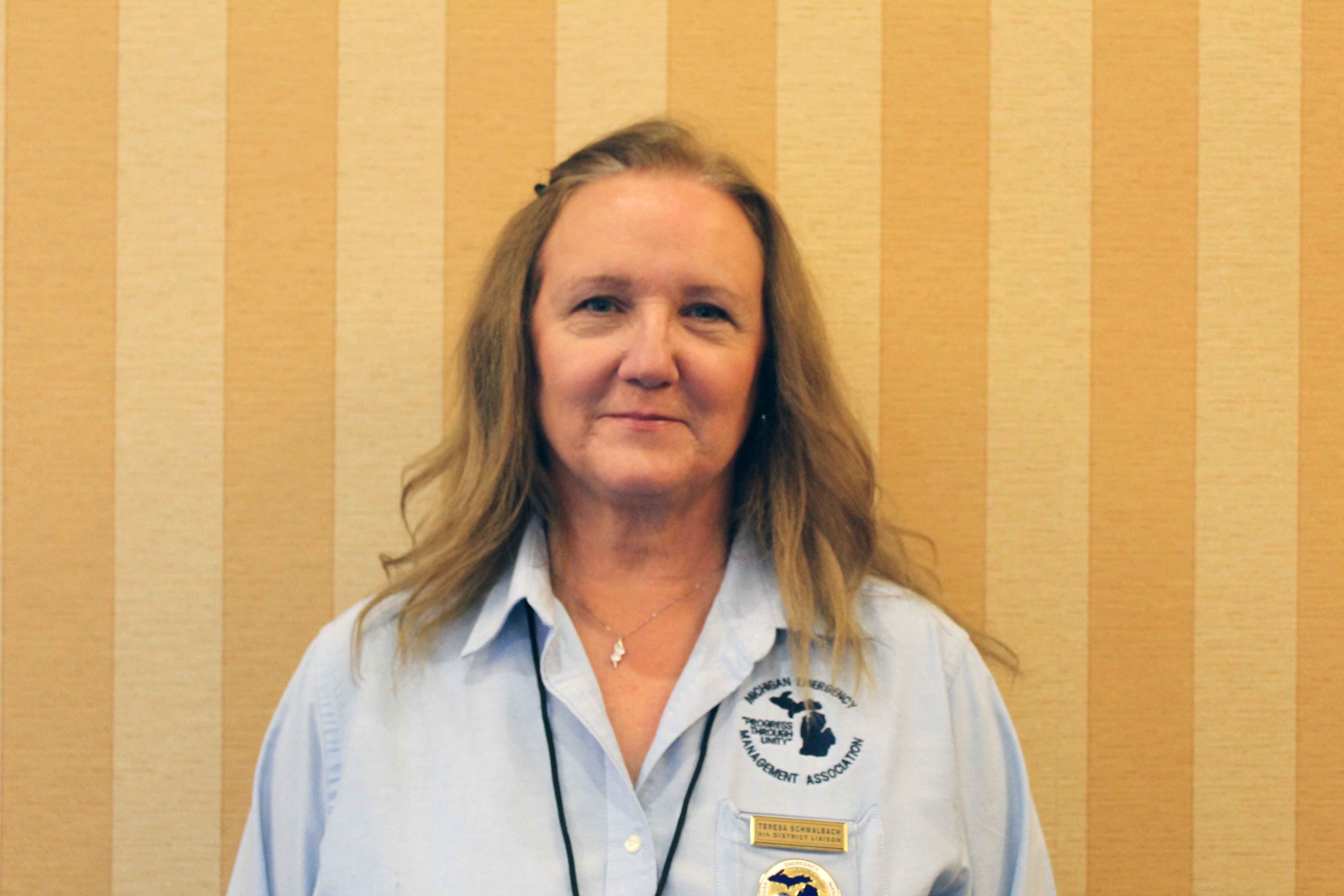 Teresa Schwalbach is the Emergency Management Coordinator for the County of Marquette, Michigan. She has worked in the public sector her entire career and in emergency management for the past 25 years. She coordinated the team of local, state, and federal agencies participating in the emergency response activities during the Silver Lake Dam flood event in May 2003. As a result, she was asked to write an article for Hydro Review magazine in 2004 and International Dam Safety magazine 2008 on the flooding event and the value of planning for emergencies and testing emergency plans. She has presented at various conferences including the Dam Association Conference in San Francisco in 2004 and the Canadian Dam Association Conference in Calgary, Canada in 2005. She was invited back to Canada to present as a guest speaker at the 2014 Canadian Dam Association Conference in Banff, Alberta, Canada on the past and present look at the Silver Lake Dam event.

She is a member of the Michigan Emergency Management Association and serves as the District Liaison for the Upper Peninsula. She is also a member of the State of Michigan Citizen Corp Focus Group and is the Citizen Corp Coordinator for Community Emergency Response Teams (CERT) in the U.P. She is Chair of the U.P. Regional Homeland Security Board representing Marquette County and serves on other various committees throughout the county.